NEW DELHI: Even as water tables drop around most parts of the world, recharging groundwater aquifers naturally could still be done effectively in Delhi and other parts of the country by simply maintaining and rejuvenating the lost wetlands, experts observed on Saturday — on the occasion of World Wetlands Day. 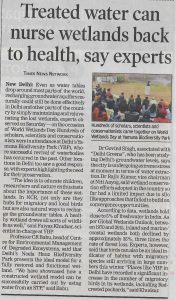 Hundreds of scholars, scientists and conservationists were in attendance at Delhi’s Yamuna Biodiversity Park (YBP), where successful revival of waterbodies has occurred in the past. Other locations in Delhi too saw a good response, with experts highlighting the need for their preservation.

“The idea is to educate children, researchers and nature enthusiasts about the importance of these wetlands. In NCR, not only are they hubs for migratory and local birds but are also natural ways to recharge the groundwater tables. A healthy wetland draws all sorts of wildlife as well,” said Faiyaz Khudsar, scientist in-charge at YBP.

Professor CR Babu, head of Centre for Environmental Management of Degraded Ecosystems, said that Delhi’s Neela Hauz Biodiversity Park presents the ideal model for a fully restored and functional wetland. “We have showcased how a constructed wetland model can be successfully carried out by using water from an STP,” said Babu.

Dr Govind Singh, associated with “Delhi Greens”, who has been studying Delhi’s groundwater levels, says the city is undergoing extreme stress at moment in terms of water extraction. Dr Rajiv Kumar, vice chairman at Niti Aayog, said wetland conservation efforts adopted in the country so far had a limited impact due to silo like approaches that failed to build on convergence opportunities.

According to data, wetlands hold close to 5% of freshwater in India. As per Global Wetlands Outlook, between 1970 and 2015, inland and marine/coastal wetlands both declined by approximately 35%, three times the rate of forest loss. Experts, however, said that birds can also be an ideal indicator of habitat with migratory species still arriving in large numbers this winter. “Places like YBP in Delhi have recorded a significant increase in the number of migratory birds in its wetlands, including Red-crested pochards,” said Khudsar.