Human survival on Planet Earth is possible only due to large number of interactions taking place in Nature. Throughout our life, all that we consume, use and depend on comes directly from Nature. It therefore becomes our responsibility to take care of Nature and give back in whatever way we can.

One way of saying Thank You to Nature is by planting trees. This is because the basic thing we need to remain alive, oxygen, is obtained only from trees and green plants. Trees carry out photosynthesis, which is perhaps the only known mechanism for converting sunlight into oxygen and organic matter (used as food and raw material).

Noble is the birth of trees who give life to all beings. They are like gentle souls who never turn away anybody disappointed.

In fact, it has been known for some time now that the total lifetime oxygen consumed by one person is approximately equal to the oxygen produced from seven trees. Delhi Greens is therefore of the strong belief that every person must plant at least seven trees in their lifetime. We encourage you to consider this as your moral and spiritual duty and responsibility and ensure that you plant at least seven trees as soon as you can. 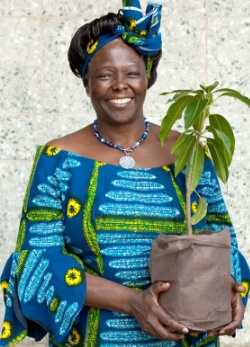 Prof. Wangari Maathai, the first African woman to win a Nobel Prize for her contribution to sustainable development, democracy and peace, simply planted trees for prosperity. Prof. Maathai started a grassroots movement in 1977 aimed at countering deforestation that was threatening the means of subsistence of the agricultural population.

On 5 June 1977, marking World Environment Day, she initiated a procession to Kamukunji Park in downtown Nairobi to the outskirts of the city. A total of seven trees were planted there, in honour of historical community leaders.

The resulting Green Belt Movement encouraged women to plant trees in their local environments and to think ecologically. It soon spread to other African countries, and contributed to the planting of over thirty million trees.

Back home in India, people like Gaura Devi have been known to put their life at risk and hugged trees to protect them. The resulting Chipko Andolan that started in Uttarakhand in the 1970s is now an international symbol of protecting trees. Prior to this, Amrita Devi Bishnoi and many others gave up their lives for protecting trees around their village in the eighteenth century.

Trees are the only source of life-giving oxygen and they give us priceless services of all kinds. Delhi Greens once again urges you to grow at least seven trees in your lifetime to say your Thank You to Mother Nature.