A Healthy Tree Worth Rs 24 Lakh Per Year: Report

The economic value of a healthy tree with respect to its oxygen producing capacity is roughly Rs 23.72 lakh per year, claims a report by NGO Delhi Greens. 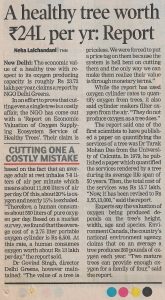 In an effort to prove that cutting even a single tree is a costly affair, the NGO has come out with a ‘Report on Economic Valuation of Oxygen Supplying Ecosystem Service of Healthy Trees’. Their claim is based on the fact that an average adult at rest inhales 7-8 liters of air per minute which means about 11,000 liters of air per day. Of this, about 20% is oxygen and nearly 15% is exhaled. “Therefore, a human consumes about 550 liters of pure oxygen per day. Based on a market survey, we found that the average cost of a 2.75 liter portable oxygen cylinder is Rs 6,500. At this rate, a human consumes oxygen worth about Rs 13 lakh per day,” the report said.

Dr Govind Singh, director Delhi Greens, however maintained: “The value of a tree is priceless. We were forced to put a price tag on them because the system is hell bent on cutting them and the only way we can make them realize their value is through monetary terms.”

While the report has used oxygen cylinder rates to quantify oxygen from trees, it also said cylinder makers filter oxygen from the air. “They do not produce oxygen as a tree does.”

The report said one of the first scientists to have published a paper on quantifying the services of a tree was Dr Tarak Mohan Das from the University of Calcutta. In 1979, he published a paper which quantified the services rendered by a tree during its average life span of 50 years. Then, the total cost of the services was Rs 15.7 lakh. “Now, it has been revised to Rs 3,55,13,000,” said the report.

Experts say the valuation of oxygen being produced depends on the tree’s height, width, age and species. Environment Canada, the country’s national environment agency, claims that on an average a tree produces 260 pounds of oxygen each year. “Two mature trees can provide enough oxygen for a family of four,” said the report.