Fate of Elevated Road Project to be Decided on July 23

The fate of the Meera Bagh-Vikas Puri and Mangol Puri-Madhuban Chowk elevated corridor project on the Outer Ring Road in west Delhi may be decided on July 23.

Hearing a petition which said there was no environmental impact assessment (EIA) for the project, the national green tribunal in June had ordered an interim stay on felling of trees for the corridor. 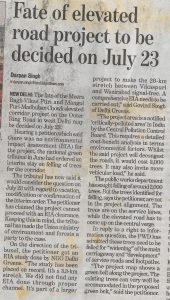 The tribunal has now said it would consider the question on July 23 with regard to vacation, modification or confirmation of the interim order. The petitioner has claimed the project cannot proceed with an EIA clearance. Keeping this in mind, the tribunal has made the Union ministry of environment and forests a party to the case.

On the direction of the tribunal, the petitioner got an EIA study done by NGO Delhi Greens. “The study has been placed on record. It’s a 3.3-km stretch. We did not find any EIA done through proper channel. It’s part of a larger project to make the 20-km stretch between Vikaspuri and Wazirabad signal-free. A comprehensive EIA needs to be carried out,” said Govind Singh of Delhi Greens.

“The project area is a notified ‘critically-polluted area’ in India by the Central Pollution Control Board. This requires a detailed cost-benefit analysis in terms environmental factors. Whilst the said project will decongest the roads, it would cost 3,000 trees. It may also invite more vehicular load,” he said.

The public works department has sought felling of around 2,000 trees. But the trees identified for felling, says the petitioner, are not in the project alignment. The trees are on the service lanes, while the elevated road has to come up on the central verge.

In reply to a right to information question, the PWD has admitted these trees need to be felled for “widening” of the main carriageway and “development” of service roads and footpaths.

“The project map shows a green belt along the project. The existing trees can very well be accommodated in the proposed green belt,” said the petitioner.