Weak Law Enforcement and Apathy Defeat Efforts to Save Capital

NEW DELHI: The Delhi government has put in place a plethora of environment laws ranging from a ban on use of plastic bag to feeding of animals. The city is also home to an army of activists who keep a strict watch on issues they are passionate about. While they have succeeded in bringing several environment issues into mainstream discussions,
weak enforcement of rules and generally insensitive government agencies and individuals have meant that many steps taken to improve the city’s environment have shown no results. 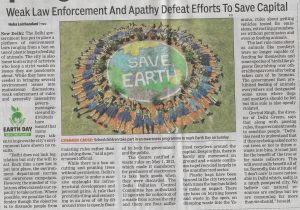 “Delhi does not lack legislation but only the will to act. Each time a new law is put into place, the environment department carries out awareness campaigns. However, the number of violations often exceeds our capacity to take action. Where possible, we penalize the offender though the objective is to dissuade people from violating rules rather than punishing them,” said a government official…

…Govind Singh, the director of Delhi Greens, says that along with passing rules, the government needs to sensitize people. “Delhiites need to understand that if they are being asked not to cut trees or not to throw e-waste into bins, it is not just for the benefit of the tree or for waste collectors. This will eventually benefit all of us. Secondly this attitude of ‘I don’t care’ is more noticeable in Delhi which, sadly, is a much pampered city. We believe our natural resources are endless but we are consuming far more than we should,” he said.