It’s Official: Fewer Saplings Planted for Each Tree Felled in the Capital

A statement on Delhi forest department website confirms the fear of the civil society groups and makes it official that fewer saplings are being planted to make up for the green cover loss.

The two-page press release reads, “The forest department is also facilitating individuals/user agencies to plant saplings of at least five trees to compensate for the environmental loss by allowing felling of trees under the Delhi Preservation of Trees Act (DPTA) 1994.” 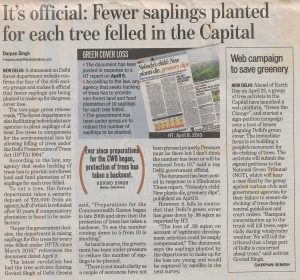 According to the law, any agency that seeks hacking of trees has to provide non-forest land and fund plantation of 10 saplings for each tree felled. To cut a tree, the forest department takes a security deposit of Rs. 28,000 from an agency, half of which is refunded after 10 years if compensatory plantation is found to be satisfactory.

“As per the government decision, the department is raising saplings for five trees for every tree felled under DPTA since March 2010,” reiterates the document dated April 9.

The latest revelation has had the tree activists fuming. Govind Singh of Delhi Greens said, “Preparations for the Commonwealth Games began in late 2008 and since then the protection of trees has taken a backseat. To see the number coming down to 5 from 10 is shocking.”

As land is scarce, the government has been under pressure to reduce the number of saplings to be planted. “There is not much clarity as a couple of sentences have not been phrased properly. Pressure must be there but I don’t think the number has been or will be reduced from 10,” said a top Delhi government official.

The document has been posted in response to a Hindustan Times report, “Nobody’s child: New plants die, greenery dips”, published on April 9. However, it fails to contradict that Delhi’s green cover has gone down by .38 sqkm as reported by HT.

“The loss of .38 sqkm on account of legitimate development activities could be amply compensated.” The document says the saplings planted by the department to make up for the loss are young and would be captured by satellite in the next survey.