To celebrate World Environment Day and to keep the momentum going, Time Out Delhi’s recent (June) edition has brought together the whole palette of green: hardliners, pragmatists, those who fight in the courts and those who make money off their green beliefs. The question it asks is, where do you fit in? 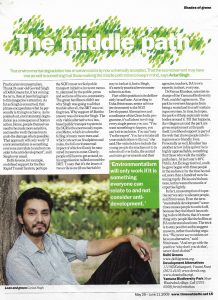 That environmental degradation has a human cost is by now universally accepted. That the eco-movement may have one as well is something that those walking the middle path strive to keep in mind, says Avtar Singh.

Practical environmentalism. Thank 24-year-old Govind Singh of Delhi Greens for, if not coining the term, then at least bringing it to this magazine’s attention. As far as Singh is concerned, that phrase encapsulates what he personally is trying to achieve.

As he pointed out, environmental degradation is a consequence of human action. Hence, people themselves need to be made more sensitive, and need to work themselves to undo the damage where possible. That approach will only work “if environmentalism is something everyone can relate to and not consider to be anti-development”, said Singh over email.

Delhi Greens, for example, mobilised support for the Bus Rapid Transit System, perhaps the NCR’s most reviled public transport initiative in recent memory, slammed by the public, press and sections of the eco-community. The green hardliners didn’t see why Singh was going to all that trouble: after all, the BRT was cutting trees. Why support it? But the answer was obvious for Singh.

The only viable alternative to a bus-based public transport system in the NCR is the enormously expensive Metro, which involves the felling of many more trees and which cuts across floodplains and nalas, the full environmental impact of which will only be measured in years to come. Clearly, people still have to get around, so his organisation rallied around the BRT. To say that it’s the lesser of two evils is one (if uncharitable) way to look at it, but to Singh, it’s merely practical environmentalism in action.

Part of this position is its deliberately broad base. According to Usha Srinivasan, senior advisor (environment) to the NGO Development Alternatives and coordinator of the Clean India programme, it’s all about involving every single person you can. “You want something to happen, you can’t sit in isolation. You can’t say ‘I’m the expert’. You have to take all your stakeholders with you,” she said. Her stakeholders include the young people she reaches out to in schools all over India, the central and state governments and their agencies, teachers, DA’s own experts: in short, everyone.

Dr Faiyaz Khudsar, scientist-in-charge of the Yamuna Biodiversity Park, couldn’t agree more. The park he oversees has gone from being a wasteland to a self-sustaining ecosystem. In time, he hopes, the park will help replenish water bodies around it. Till that happens, the villagers around the park are given employment at the park itself. Livelihood support is part of the web that draws people into living more eco-friendly lives.

Personally as well, Khudsar has another arrow in his quiver: he is highly approachable, something that those who walk the middle path share. At last year’s 48°C Public.Art.Ecology festival, a talk he gave began with three people in the audience: by the time he ended, more than a hundred were listening raptly. He knows his business, but he wears the mantle of expertise lightly.

In fact, an assumption of expertise serves only to alienate people, said Srinivasan. Even the term “sustainable development” sometimes causes people to switch off, because they feel that it has nothing to do with them, that it’s something only people like the boffins at DA understand and own. The trick is to stay positive and to suggest answers, rather than being negative. “We never say no unless we have an alternative,” said Srinivasan. “And we go with the positive: ‘why don’t you do this’, never ‘don’t do this!’”