In Delhi, children made sure that grownups switch off the lights during Earth Hour on Saturday.

Sixth-standard student Anand Chowdhary of Mother’s International School campaigning for Earth Hour in his neighbourhood. He and his little sister downloaded Earth Hour logo and made 100 badges and distributed among neighbours in Greater Kailash-2 in South Delhi. 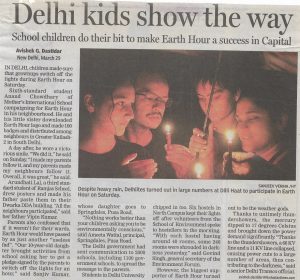 A day after, he wore a victorious smile. “We did it,” he said on Sunday. “I made my parents follow it, and my parents made my neighbours follow it. Overall, it was great,” he said.

Arundhati Lal, a third standard student of Ramjas School, drew posters and made his father paste them in their Dwarka DDA building. “All the neighbours participated,” said her father Vipin Kumar.

Parents also confessed that if it weren’t for their wards, Earth Hour would have passed by as just another “useless fad”. “Our 10-year-old daughter brought activities from school asking her to get a pledge signed by the parents to switch off the lights for an hour,” said Sanjiv Kumar, whose daughter goes to Springdales, Pusa Road.

“Nothing works better than your children asking you to be environmentally conscious,” said Ameeta Wattal, principal, Springdales, Pusa Road.

The Delhi government had sent communication to 2000 schools, including 1100 government schools, to spread the message to the parents.

Students in Delhi University chipped in too. Six hostels in North Campus kept their lights off after volunteers from the School of Environment spoke to hostellers in the morning. “With each hostel having around 40 rooms, some 240 rooms were shrouded in darkness yesterday,” said Govind Singh, general secretary of the Environment Forum.

However, the biggest supporter of Earth Hour turned out to be the weather gods.

Thanks to untimely thundershowers, the mercury dipped to 17 degrees Celsius and brought down the power demand significantly. “Thanks to the thundershowers, a 66 KV line and a 11 KV line collapsed, causing power cuts to a large number of areas, thus contributing to the darkness,” said a senior Delhi Transco official.